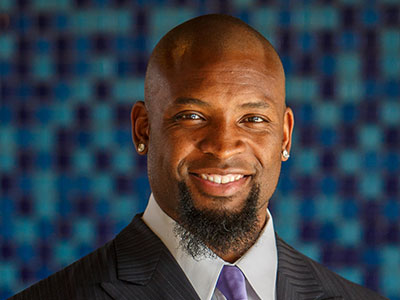 Ahman Green works to deliver benefits to children’s charities in Wisconsin and Nebraska.

When he retired from the NFL in August 2011, Ahman Green closed the book on an impressive career that started in high school, where he earned all-American and Player of the Year honors, along with two Academic All-State awards.

When the proud parent of five isn’t relaxing with his family, Ahman Green generously lends his support to the Make-A-Wish Foundation, the Boys And Girls Club and the Children’s Hospital of Wisconsin and Nebraska, just to name a few. He has also served as a mentor at Seahawks Academy in Seattle, providing special education and counseling to “at-risk” students. Recently, he founded The Ahman Green Foundation, a charity focusing on cancer research and youth development.

Ahman Green founded the Ahman Green Foundation in 2001. He also serves as the leading spokesman for the Alzheimers Association of Wisconsin, making appearances and assisting with fundraisers to help find a cure for the disease. Later this year he will be inducted into the Green Bay Packers Hall of Fame and will use his platform to continue his good work.